Test just how much you know about the history and culture of Native Americans in this fun, bi-lingual quiz game created for the Smithsonian National Museum of the American Indian in New York!

All of the hardware and graphic design was done by Quatrefoil Associates and I was the programmer. This project is actually a revamping of a project that I did when I was still an employee of Quatrefoil Associates about 8 years ago - the original program is located at the National Museum of the American Indian in DC. The game can be played in either English or Spanish, with audio in both languages for all 100 questions. 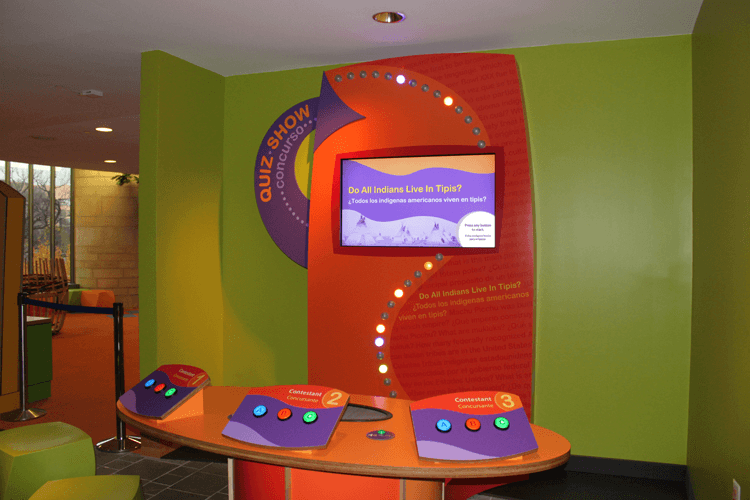 The original program from 2011, located at the Smithsonian National Museum of the American Indian in DC. Image courtesy Quatrefoil Associates.

The game was programmed in C#/WPF, and it includes its own custom CMS for updating the quiz questions. 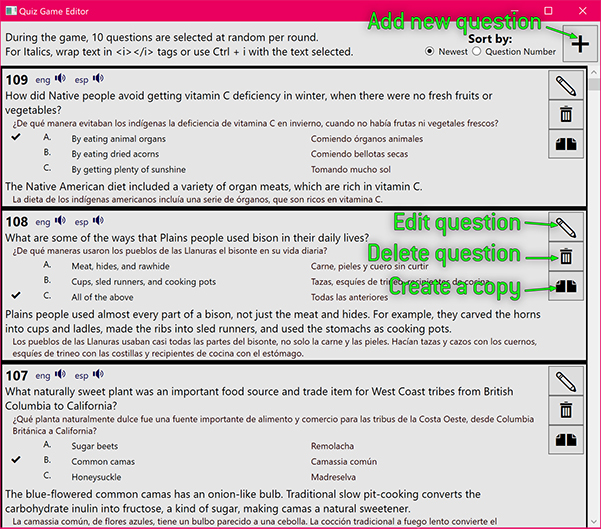 A screenshot of the question editor with a few bonus labels

So, there were a couple of things that I enjoyed most about working on this project. One - it's always fun to go back and look at code you wrote a long time ago. I didn't have anywhere near as much experience coding when I wrote the original quiz game, and I wound up using really inconsistent naming conventions, less than elegant algorithms, and more. It's nice to see that I've learned a lot over the last seven years.

The other thing that I enjoyed was working with WPF and Blend. I hadn't built anything with it in a while for obvious reasons - it only runs on Windows desktops! Haters gonna hate, but the animation capabilities are as easy to use and produce as nice results as Flash. And man, I hate Flash. Even back when people still used it, I hated it.

Below is a gif sample of the attract screen that I programmed and animated. It looks lovely, and was really fun to work on. The little lights on the question mark animate randomly in attract mode, but function as question number indicators in the game. Using WPF's visual state manager, I can have them do both functions with a lovely animation that's nicely scoped away from the rest of the programming.

A short sample of the Attract Screen animation - it randomly samples questions from the game, and the lights on the question mark flash. The question mark's dot also functions as a timer during gameplay.