Grief has always been an extremely private thing for me. When my father died almost six years ago, I was debating whether or not to post anything about it on Facebook. My final decision was not to because I felt that anything I put up would be more about me than it would have been about him. I emailed or called all of my closest friends and those that knew him to let them know what had happened, and any other broadcasting of the situation seemed like it would have been superfluous and attention-seeking. The night he died was an unbearably hot July-in-Pennsylvania night where, with the 95% humidity levels, the temperature never dropped. My parents didn't have any air conditioning to speak of, of course. I'll never forget it. My siblings and I grieved mostly privately in my parents' backyard. 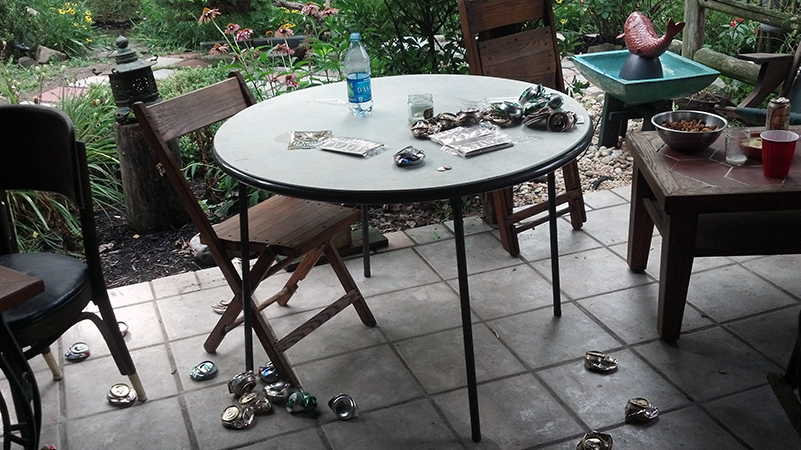 Our grieving process involved a few cases of Yuengling because Pennsylvania. More cans not pictured.

But now here I am, writing about it in a (technically) public venue. So what changed? And why write about it now?

This Monday my father's sister Mauna passed away. She died a good death with her family around, just like my father had done before her. She lived a couple hours away from me in Northern New Mexico, but with my two kids I wasn't able to visit her as many times as I would have liked. She was one of the most interesting people I've ever met, and it's a great regret that I didn't make more time for her. Which, in fact, is what inspired me to write this post. Let me back up a little bit.

My first year of marriage with my husband was a rough one, and not for the stereotypical reasons of newlyweds fighting over who does the dishes or whatever. Shortly after our marriage, we moved 2000 miles away to New Mexico, and soon after that, I got the phone call that two of my friends and coworkers from Quatrefoil/Mars Labs had been killed in a boating accident on the Chesapeake Bay. One of them, Tyler, I credit with pretty much teaching me C#. The other, Dan, is someone that I constantly feel like I failed because I was never kind enough to him. About a month after that, we found out that another of our friends from the DC area, Brian, had committed suicide. He was also someone that I felt like I had failed, although that's a longer story. For many months after that happened, I had dreams that I would run into one or more of these men and say "Oh hey! I thought you had died. I'm glad it's not true!" but then wake up to reality.

That summer was the summer that my father passed away. In some ways it's easier to process the death of a man in his seventies rather than one in his twenties, even though he was my father. However, the dreams continued for about a year where I was continually seeing him and asking him whether he had really died or not. That's something that I told almost no one, but eventually the dreams stopped.

This spring, one of my favorite volunteers from the planetarium, Bill, passed away. He was always amazing at doing the shows for little kids, and the little kids loved him. At his funeral, I tried desperately not to cry. I missed him, and somewhat selfishly, I was crying because I missed my dad as well. Every death I've experienced has been like experiencing them all all over again - hence the title of the post. My mother told me that this is normal and what's called "Casting up Shadows."

And it happened again with my Aunt Mauna. I'll miss her and regret that I failed so many times to go visit her. I'll regret that I was never kind enough to Dan, never thanked Tyler, never saw Bill much after I left, and was never considerate enough of Brian. So many times I wasn't there to hang out with my dad, or lost my patience with him, or fought over something stupid. These are things I'll never be able to change.

And that brings me to why now, and why be so public. I realized that, while I'm sure this is obvious to most other people, that our grief isn't really about the people who passed away. I believe they're with God now. Instead, the grief is for the holes in our lives that they left that we'll never fill, and for all the ways that we could have been more for them while they were still here. So by all means, don't be as private as I had been. Be as private as you need to be to process your own grief. Don't forget that you're never promised tomorrow, so, as cliche as it sounds, be loving and kind today.

Art from the Met's open-access collection. Mourning picture, painted around 1810.